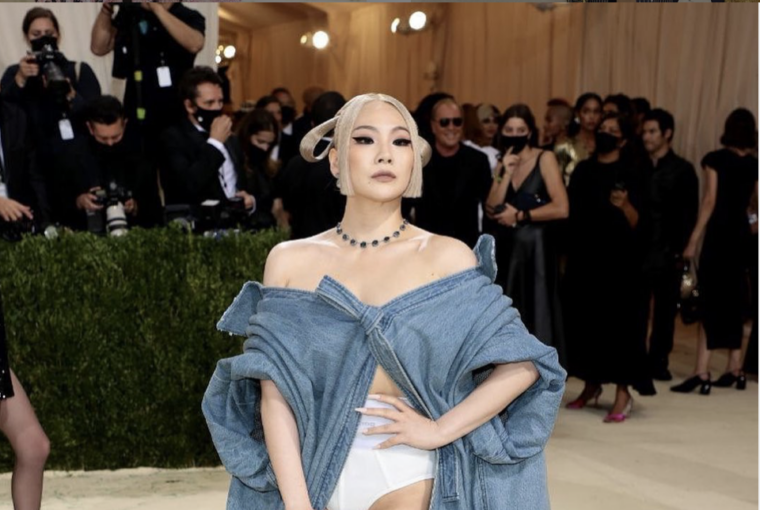 CL "understood the assignment," attends the Met Gala 2021 in denim and white briefs. The Met Gala is an annual fundraising event for the benefit of the Metropolitan Museum of Art's Costume Institute in New York City. Photo: themetgalaofficial/Instagram

While it is true that K-pop may have already pervaded the world’s entire cultural landscape, there may still be records to be broken, glass ceilings to be shattered, and opportunities to be taken advantage of. This is especially true in the world of fashion, with K-pop’s influence only manifesting in recent years.

While groups such as 2NE1 and Girl’s Generation may have endorsed global brands such as Fila, Adidas, and Casio, it was only in 2017 when BIGBANG’s G-Dragon was selected by Karl Lagerfeld himself as the brand ambassador for Chanel. While many idols have been spotted attending fashion shows for haute couture houses and getting front seats to the world’s premier fashion weeks, it was also only two years ago when WINNER’s Mino was handpicked to walk in LV’s men’s wear collection in Paris. While former 2NE1 leader CL did walk the runway for DKNY in 2014, it was only in Seoul.

So, it may not come as much of a shock when it was only this year’s Met gala that saw not one, but two of K-pop’s luminaries in attendance. And what a debut it was for Blackpink’s Rosé and CL! It is the first time that two leading female figures of K-pop attended the event, as only the guys have graced the Met’s annual fundraiser in previous years. In the past, only men—Psy, Super Junior’s Siwon. Rain, and EXO’s Lay—have raised the banner for K-pop on one of the fashion industry’s biggest nights.

As the event last year was postponed, it seems that everyone in attendance was all too eager to make up for lost time as they pulled out all the stops, fashion-wise to the event’s theme, “In America: A Lexicon of Fashion.” Iman appeared in what looked like a chandelier gown and an enormous headdress, Rihanna wore a black voluminous gown and Balenciaga beanie from the house’s latest couture collection, and Kim Kardashian wore a black-out Balenciaga haute couture gown with matching mask and train which cloaked her features and for a time, gave the celebrity a fair amount of anonymity.

So, how did our fierce K-pop ladies fare? Blackpink’s main vocal wore a classic little black dress with a twist as a white asymmetrical bow hid her cleavage area. As the brand ambassador official of international fashion house Saint Laurent, she didn’t only show up wearing a YSL dress, but actually appeared on the Met steps alongside the house’s creative director Anthony Vaccarello.

On the other hand, the Spicy singer, in adherence to the theme, wore a blue denim coat, because what can be more American than denim? The coat, as American as it is in detail, has a distinctly Korean detail with a ribbon that is usually attached to a hanbok top. She wore this over white briefs, and the attire was designed by Taiwanese-American fashion staple Alexander Wang.

With Rosé and CL making their presence felt at the 2021 Met Gala, here’s to hoping that we can see more K-pop ladies in its future stagings, with the next one happening in May to make up for last year’s canceled event.

Featured image: CL “understood the assignment,” attends the Met Gala 2021 in denim and white briefs. The Met Gala is an annual fundraising event for the benefit of the Metropolitan Museum of Art’s Costume Institute in New York City. Photo: themetgalaofficial/Instagram

K-pop in Met Gala: A Wishful Thinking List of Idols to See at the Fundraiser