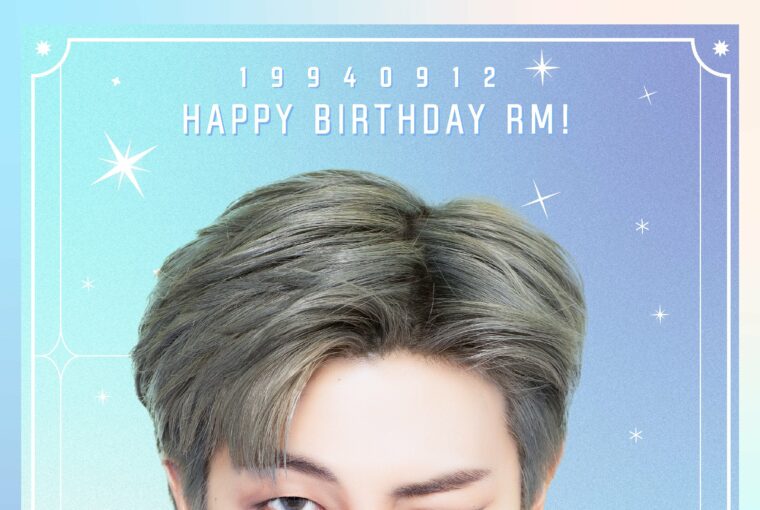 BTS’s leader, Kim Namjoon, is effortlessly extra in a lot of things. He has an IQ of 148, chose rapping and music over school (he once ranked as South Korea’s top 1% students), serves as BTS’s English translator since he learned the language by watching the sitcom Friends, lives and breathes as BTS’s God of Destruction every chance he gets, and, at the age of roughly 19, started to lead the Bangtan Boys.

Rightfully so, ARMYs all over the world also go extra in celebrating Namjoon Day every September 12. Just like Kookie’s birthday celebration, tributes poured out for leader-nim Rrrrrrrap Monster this year.

Billboards and display ads
ARMYs made it an agenda to let Namjoon and the world know about RM’s birthday. In South Korea, ARMYs installed various RM ads across the country. These include digital billboards, display ads, a book café, a “book street” that showed different tribute posters for the BTS member.

ARMYs in New York were blessed with these Times Square ads.

I'm so glad I got to catch this in New York! Happy birthday Namjoon! 💜💜 pic.twitter.com/GeqCoUUzOn

In Pakistan, ARMYs broke through by putting up RM Birthday Ads in Lucky One Mall, Karachi. Fans say that RM is the first South Korean idol to have such a display in the biggest mall in Pakistan.

Namjoon is the first Korean idol in Pakistan to have a Bday ad display at the biggest mall of Pakistan and South Asia.
The ad will be on display for the whole day today.#RMonPakistaniLED pic.twitter.com/75F9iMyNnn

Namjoon is a known lover of art and museums. With this, ARMY artists teamed up to create a virtual gallery of fanart and fan-made portraits of RM.

RM portrait gallery for his birthday is open! https://t.co/HdUBQ1A3Xs pic.twitter.com/aSzQprDvyI

ARMYs also showed their love in this 92 minute-long greeting project that’s full of kind words and heartfelt messages for RM.

They also used the occasion to showcase their creativity, as seen in this poem-writing initiative.

It’s no secret that Namjoon has developed a love for art and has shared it with us. 🎨

To further that, for Namjoon’s birthday, we decided to create an event inspired by Ekphrasis poetry. ✍️

What is an Ekphrasis poem? Check the photo below to know more! ⬇️#HAPPYRMDAY@BTS_twt pic.twitter.com/AFq4aG2JEc

This group partnered with Greenpeace for their initiative. It’s a month-long joint project for Namjoon and Jungkook’s birthdays.

Join us as we celebrate NamKook for Nature, a month-long campaign in collaboration with Greenpeace @gpph. Together, we’ll learn what it means to be #EarthWarriors and to strive for a sustainable future.

Another group of ARMYs worked in creating storybooks for children.

In honor of Namjoon's 🐨 birthday we present:#JoonAndYouthForArt🎨@ACFFCjacmel empowers children in need through art, to give them tools to create their own reality. They provide art tutoring, food and water, educational expenses and more.

Other ARMYs also gathered to help victims of gender-based violence.

Tree-planting projects were also arranged by ARMYs all over the world.

Hey army we are doing a special project for Namjoon’s birthday. “ Trees 4 Joon” a donation to save the environment. We would greatly appreciate the help #RM #Trees4Joon #ARMYhttps://t.co/L90DeYZqf9

For Namjoon’s Birthday we want to collect Money together with @rmswissarmybase & @bts_swiss_army and donate in his name to the organization BOS Switzerland, a organization for Protection of the Rainforest and its Animals.

These are only some of the ways ARMYs celerbated Namjoon Day, and, considering RM’s positive impact, we are certain that there are a lot more out there.

Celebrating the one and only Rrrrrrrap Monster

RM doesn’t mean “Rap Monster” for no reason. He carries the name for his incredible rapping skills. Just check out how he spat and sped through bar after bar in his solo track from 2015.

His performances are just amazing and topnotch

All while exuding that effortlessly cool vibe.

But he can be cute and soft, too. His love for that small crab? ADORABLE.

RM is also known for being one of the youngest and most credited songwriters in the industry. Last July, he trended on Twitter for having more than 170 songs under his name (and counting!).

The second most credited Korean artist and the youngest! so proud of you joonie💜

Even when he is offstage, Namjoon shows that he is the epitome of a good group leader. Even other K-pop idols take him as a role model. We have witnessed this time and again, whether it’s for a huge concert, variety show, or Bangtan Bomb episodes.

He can get a bit scary, but that’s just him caring for the group.

Have we mentioned that Namjoon is a genius?

And that he learned to converse in English by watching the sitcom Friends? Tbh with BTS members taking English lessons now, we will surely miss RM’s strong power translations.

And he’s great at Math, too. Totally nothing extra about it.

He doesn’t fail to make ARMYs and BTS laugh, whether it’s through his jokes, expressions, or just exceeding expectations as God of Destruction.

Beyond all these, we love Namjoon because of his kind heart and how he spreads positivity through his platform.

He even led the UN speech addressed to the youth.

Whenever BTS was asked about RM, a unified voice says that they won’t be who they are today if he wasn’t their leader (and yes, even though he and V once sneaked out for some Melona after tonkatsu while they were still trainees. Lol; I know.) With all their achievements and seeing how well they have raised the Maknae Line, we all have proof that while Namjoon is BTS’s God of Destruction, he has created a lot of good in this world.

Lalisa: BLACKPINK’s Lisa Reminds the World of Her Name in Record-Breaking Fashion