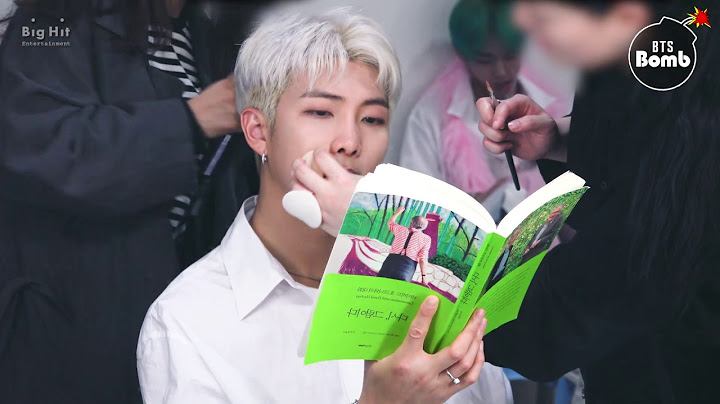 RM, BTS's resident genius, reads "A Bigger Message: Conversations with David Hockney" by Martin Gayford" while preparing for a performance.

One might think that with their super busy schedules, idols won’t have time to even crack open a book. But, it turns out that there are a lot of bookworms among idols—and they love recommending new reads to fans! Check out these K-pop idols’ book recommendations, what they have read, or were spotted with:

K-pop idols’ book recommendations 1: I Decided to Live as Me by Kim Soo Hyun

"I Decided to Live as Me" by Kim Soohyun is a self-help book for young adults. Compared to most self-help books, this book does not dictate any way of life, but instead helps reassure the worries, uncertainty, and the struggle to fit in, common in youth 📖 pic.twitter.com/js3jwqMtgc

Have you ever felt overwhelmed as you took your first steps into adulthood? Or maybe you’ve had days when you felt lost, insignificant, or worthless? Try reading I Decided to Live as Me, a collection of short essays by Kim Soo Hyun, to soothe your worries. The book is filled with nuggets of wisdom such as, “The person that you always have to respect is no one else but yourself.” This blunt, no-nonsense self-help book (peppered with cute illustrations that break up the seriousness of some of the topics) teaches important life lessons that will empower everyone to accept themselves for who they really are and live well.

BTS’ golden maknae Jungkook was seen packing this book in his bag in the group’s travel variety show Bon Voyage season 3. Sales of the book increased almost immediately after the show was aired, as ARMYs became interested and began reading and recommending it to friends.

The BTS members are certified book lovers! Leader RM, in particular, often recommends the books he read and loved to ARMYs. One such RM-approved book is Almond by Sohn Won Pyung. The story revolves around Yunjae, a boy born with a brain condition that makes it difficult for him to feel strong emotions like fear or anger. When he personally experiences violence and loss, he struggles to cope, until he forms a surprising bond with a new friend. It’s a touching story about growth, friendship, and love, all wrapped up in a slim volume.

RM read this book at BTS In the Soop. Fellow members Suga and J-Hope were also seen reading the novel in the show.

Super Junior’s maknae and resident genius, Kyuhyun, also likes to indulge in reading during his downtime. One of his more recent reads is Sapiens: A Brief History of Humankind by Yuval Noah Harari. This hefty, 400-plus page non-fiction book dives deep into the history of the homo sapiens—us, modern-day humans—and their motivations, innovations, and need for self-preservation. The idol brought this book with him to a solo staycation, as seen in his KYU TV channel on YouTube.

Kim Jiyoung, Born 1982 by Cho Nam Joo is the story of Jiyoung, a 30-something year old woman, and her daily struggle against gender discrimination that’s present in every aspect of her life. This takes a toll on her mental health, and she slowly descends into madness. It’s a sobering story tackling pervasive misogyny, societal oppression, and what it means to live life as a woman.

Red Velvet’s Irene revealed in a fan meeting that she read the thought-provoking book, which got her into hot water with male fans. The book is branded as a “feminist” book, and some anti-feminists in Korea perceive the novel as inciting contempt for men. Netizens even posted photos of them cutting and burning Irene’s photocards after the event.

Other idols who have read the book include BTS’ RM and Girls’ Generation’s Sooyoung.

EXO’s main dancer Kai named The Devotion of Suspect X by Keigo Higashino as a book that made a big impression on him in the KBS program The Human Condition. The Japanese crime novel tells the story of meticulous math teacher Ishigami and his neighbor Yasuko, a divorced mother. When Yasuko’s abusive ex-husband drops in at hers and her daughter Misato’s home unannounced, a fight ensues that ends in the ex-husband’s death. Ishigami offers to help cover up the crime, which results in a high-level cat-and-mouse game between the teacher and the detective in charge of the case.

Which of these books will you add to your list of must-reads?