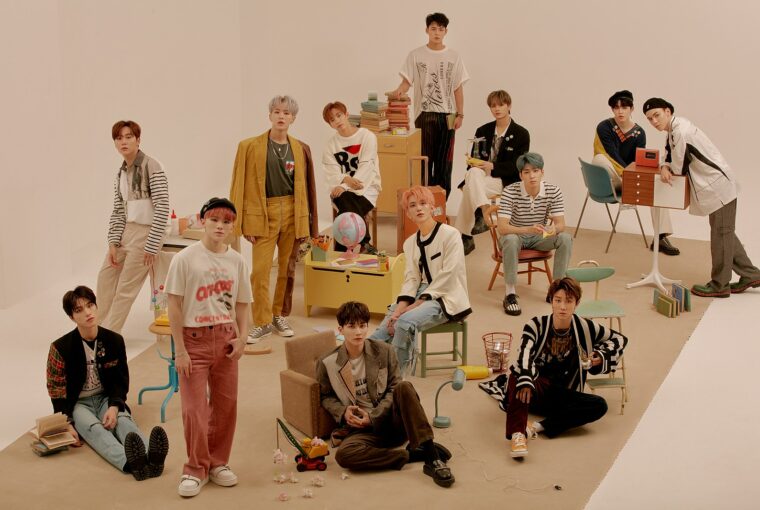 It has been six years since Pledis Entertainment debuted the group SEVENTEEN, but their discography can rival groups that have been in the business longer. It may be because of their unique configuration of vocal, hip-hop, and performance units within the larger group that has provided them with more opportunities to release more songs, or it may be because the group is essentially a self-producing unit – most, if not all of their songs have been composed and produced by the members themselves. Finally, the group has released really solid songs originally in Japanese, which adds to their already-established catalog. Not bad at all for a 6-year old group.

But whatever the reason is for their substantial musical output, we Carats are surely spoiled for choices, especially when it comes to picking out favorites. But then, it’s also a bit challenging when you are handed out one banger after another, so much so that Carats are often in a dilemma as to whether they should stay loyal to the group’s last release or move on to the latest track. Obviously, it also doesn’t help that the accompanying music videos of the title tracks are also works of art. A personal example: This writer easily dismissed Don’t Wanna Cry as one of those typical songs that heavily rely on the beat drop. Ten, I watched the music video. Those overhead shots of the group dancing in what looked like the middle of a desert silenced me. I was converted in 3 minutes, 26 seconds later (Disclosure: It helped that the first line was sung by my bias breaker Wonwoo.)

So, for their 6th anniversary this year, here are six essential SEVENTEEN title tracks. The temptation to do a list of 17 songs is strong, but I don’t intend to be overwhelmed, so six it is. This is in no particular order, because trimming them down to six has already broken me and I do not wish to further shatter my Carat heart into a million pieces by ranking my chosen six.

AT the start, the title track of the band‘s sixth mini-album, “You Make My Dawn” may sound like this warm and cozy song about declaring that you are home to the person you’re singing the song to, vice versa. But after listening to the entire song, one couldn’t help but notice an overwhelming helplessness in the verses. With lines (translated) such as “What do I do? Without you, my heart has no home” and “You’ll struggle just as much, so what can we do?”, you can’t help but wonder if the repeated assurances of “Cause I’m your home home home home” in the chorus answers the uncertainties in the verses. The open-endedness of the song is quintessential Woozi, which means it is quintessentially heartbreaking.

“Very Nice” is a high-energy track and therefore is textbook SEVENTEEN. From Vernon’s multilingual countdown at the start to Mr. Boo’s stratospheric high notes, this song is a sure mood improver guaranteed to perk you up when you’re in a sluggish mood. This song unfortunately did not win any number 1’s in music shows. That’s okay, because Wonwoo wasn’t able to join the promotions anyway due to acute gastric problems. A curiosity in the music video: The featured girl moves closer to only one member – Mingyu, on the swing. The other members either get ignored (poor Jeonghan even had to spin her around in a shopping cart) or get stared at as almost all of them burst into confetti, including Mingyu.

Pretty U is one of those songs that maximized Carat’s anticipation for the group’s live stages because the music video did not feature any choreography and only showed the group goofing around in the video’s entirety. Of course, the 13 did not disappoint come music show promotions, as the choreography showed the group in their quirky and entertaining best. From Jun introducing his members sitting on a couch, some book from Wonwoo being passed around, The8 air typing in the aforementioned couch, to Seungkwan delivering a 4-note, 8-second explosion, the live stages were an absolute treat.

As for the mysterious book, it was last seen with Woozi at the second repetition of the chorus, who passed it to its seeming owner, Wonwoo.

As mentioned earlier, I was not a fan of this song when I first heard it. That was until I saw the music video. That Hoshi had to study contemporary dance to choreograph this masterpiece is mind-boggling. Basically, the choreography sold me to the song, which otherwise I had dismissed as just another Chainsmokers sound-alike. We can’t really blame Woozi and the boys for taking this direction that time; those heavily “drop the beat”-reliant songs were all the rage in 2017. But those drone shots of the boys in perfect synchrony on the music video coupled with the balletic movements make this song a thoroughly satisfying experience.

As SEVENTEEN’s debut song, Adore U is a testament to the huge potential the group had. After all, not just any group can boast of such a strong debut single. Come to think of it, Adore U didn’t (and still doesn’t) sound like a debut song at all. That Wozzi, Vernon, and S.Coups wrote the lyrics to their first song also set a precedent to the group’s future as self-producing idols. Quite memorable as well during this era were Jeonghan’s long hair and a lot of members getting carried or lifted in their live stage choreo – Dino fainting and carried by Joshua; Jeonghan, The8, and Seungkwan carrying Vernon off to the side; and DK getting lifted by the leader while singing “Baby you’re my angel.” As the song that would preempt a lot of things about the group, this also presented maknae Dino as the group’s multiple threat – dancer, vocalist, and rapper.

The lead track off of the special album, “Director’s Cut,” is special and memorable indeed. The song is also a first of sorts for SEVENTEEN – Thanks is their first melancholic-sounding track, a departure from their usual bright and upbeat songs. The message of thanks to people who showed them love and helped them grow may sound uplifting at first, but since the recipient of the song’s gratitude appears to be no longer around, both the song and the music video take a darker turn. Referring to the choreography as intense may also be an understatement.

One thing Carats can take comfort with: All 13 members have re-signed their contracts with Pledis Entertainment a full year before their expiration. This means the group has already officially avoided the 7-year disbandment curse that has afflicted even the most iconic of k-pop groups in the past. Therefore, we are assured of at least a couple more title tracks from SEVENTEEN in the coming years.

Beyond the Stage: Male K-pop Idols in Korean Variety Shows