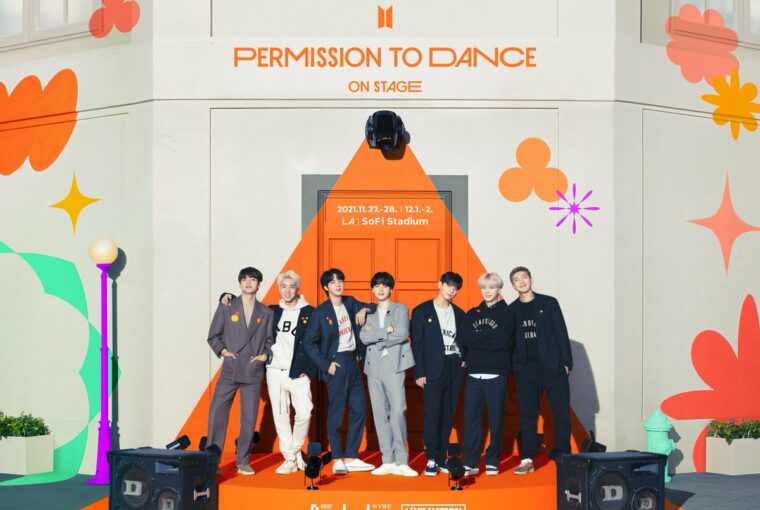 After two years of waiting, the BTS concert ARMYs have been waiting for is finally here.

Following their “Love Yourself: Speak Yourself” world tour finale at the Seoul Olympic Main Stadium in 2019 and the cancellation of their Map of the Soul tour, BTS members RM, Jin, Suga, J-Hope, Jimin, V, and Jungkook can finally dance on stage once again. On their YouTube channel—BANGTAN TV—the K-pop superstars announced their upcoming BTS concert at the SoFi Stadium in LA, happening on November 27 & 28; and December 1 & 2, 2021.

BTS ARMY’s support coupled with the fact that this concert took two years to happen means anticipating that BTS concert tickets will get sold out within minutes, as usual. Or faster than usual, which is also in minutes.

Thank you, #BTSArmy! Due to overwhelming demand, tickets are no longer available for the @bts_bighit show at this time. We hope to see you on Oct. 6th. pic.twitter.com/Wqd6HGVF5n

While the brand-new SoFi Stadium in LA has a 70,000 to more than 100,000 seating capacity and there are actually four concert dates (November 27 and 28, December 1 and 2, 2021), again, we are talking about a massive fanbase finally getting to watch the Bangtan Boys after two years.

After 2 years, BTS can now hold an offline concert (with safety protocols' consideration). It will be held at Sofi Stadium in Los Angeles that have 70k-100k capacity. The said offline concert will have 4 rounds. I'm so happy for them. #PTD_ON_STAGE_LA pic.twitter.com/BI1y8xeUmR

BTS will hold the offline concert ( 4 concerts!) at LA’s SoFi stadium, this has a capacity of 70k to 100k! this will turn into a beautiful purple ocean again soon 🥺#PTD_ON_STAGE_LA pic.twitter.com/9KWLrQ2zDP

Where can you buy BTS concert tickets?

Follow these steps to get BTS’s Permission to Dance On Stage – LA:

1. Sign up for ARMY membership on Weverse: Join BTS ARMY by October 2, 6 pm PST to get exclusive access.

2. Apply for BTS concert – ARMY member pre-sale by October 2, 6 pm PST.
You will receive this confirmation if your registration on Weverse was successful: 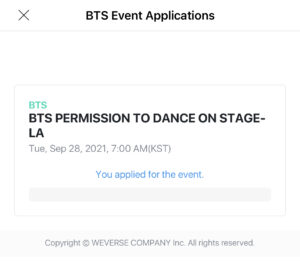 3. Register for Ticketmaster Verified Fan by October 2, 6 pm PST.
You will receive this confirmation if your registration on Ticketmaster for BTS’s concert in LA was successful: 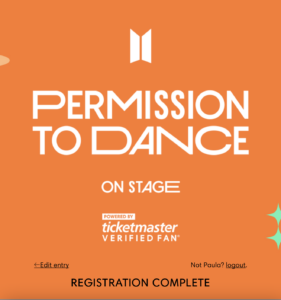 BTS WILL HAVE AN OFFLINE CONCERT AGAIN! 4 CONCERTS IN LA! SO THIS WILL HAPPEN AGAIN SOON 😭#PTD_ON_STAGE_LApic.twitter.com/A9spm1962c

How much are the tickets for BTS’s concert at SoFi Stadium in Los Angeles?

As of press time, neither Big Hit Entertainment/Hybe Corporation nor Ticketmaster has published the ticket prices. Stay tuned for updates.

It’s not just the fans who are excited for this “reunion” concert. BTS members RM, Jin, Suga, J-Hope, Jimin, V, and Jungkook have always expressed how much they have missed seeing ARMYs in their concerts.

I don't think it's online 😳 pic.twitter.com/WygCRD9pkn

and they said that they will probably cry at the opening 😭 im so happy for them!#PTD_ON_STAGE_LA
pic.twitter.com/4i8C3q7GIe

"It doesn't matter how we make our entrance. When the moment comes, I'm not sure I can hold in my tears."

remember when yoongi said this? it will finally happen soon 😭 i’m just sure BTS and ARMYs will cry the moment they see each other again!#PTD_ON_STAGE_LA pic.twitter.com/ktOpakQPAv

In the meantime, let’s enjoy their performance for BTS (방탄소년단) BTS ROOM LIVE:

And the last song they have performed on stage to date, Mikrokosmos at Love Yourself: Speak Yourself (The Final) concert in Seoul 2019:

BTS to perform live again with Permission to Dance on Stage concert in LA. Photo: bts_bighit/Twitter

For your listening pleasure: I Say Mamamoo: The Best

What We Know About SEVENTEEN’s October Comeback So Far