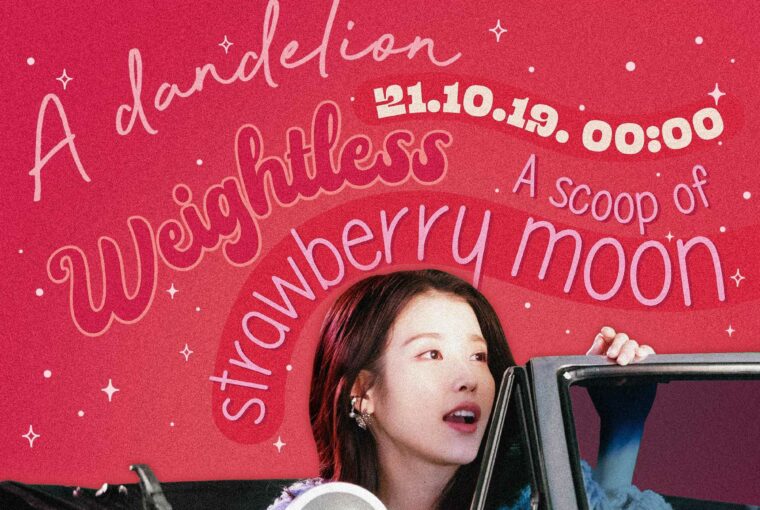 Korean singer-songwriter IU has released, as of October 19, another single that has been anticipated to break records anew. And she did that without breaking a sweat as the new song, Strawberry Moon, has reached the top position in MelOn and Bugs (both daily and real-time charts), Genie (real-time and #5 in daily charts), and FLO (which only has real-time charts) HOURS after its release. Yes, it didn’t even take a day for her to be numero uno!

In celebration of her nth #1 song (seriously we’ve lost count, although a quick Wiki search may give us 17 Gaon #1s), let’s check out the first five songs that got Ms. Lee Jieun on the top of Korean music charts.

IU wasn’t exactly a breakout hit when she started her career in 2008. She was 15 years old then, and debuting as a solo artist at 15 was not something that was common. Even now, idols who debut early are usually part of groups and reap the benefits of having a broader fanbase before launching their solo careers. Even K-pop legend BoA had to start her career in Japan first before getting recognition in her own country. IU released some singles that didn’t really accelerate her rise to stardom, before finally making it big two years later.

And how! Her first song that went to #1 on the Gaon Chart was actually a duet featuring 2AM‘s Seulong. It might be argued that the song became a hit because of Seulong, so IU can’t really take full credit for it. However, for a female soloist to have a #1 song after only two years on the business is already quite an achievement. The non-album single went on to sell more than 3 million copies, so we can safely say that Nagging was the start of her career’s rise.

Unfortunately, there is actually no official music video released for Nagging, although Seulong and IU have performed it live in music shows, which means the couple did promote the song when it came out. This is quite interesting because IU is not a JYP talent and yet, JYP Entertainment allowed Seulong to participate in the song’s promotion.

Come to think of it, this may be JYP’s (as in the company’s former CEO Park Jinyoung) way of showing remorse. After all, IU did audition for the company and got rejected. JYP’s former CEO was later vocal about his regret as he thinks of IU as the one talent who got away. Nagging brought IU and Seulong their first music show win in Inkigayo, where she won the trophy on the show’s June 27, 2010 episode. They also won two other trophies in Music Bank. The Nagging wins were also among Seulong’s first music show wins.

Aside from JYPE rejecting her, IU was also rejected nineteen other times by other entertainment agencies before LOEN Entertainment (now EDAM Entertainment) signed her.

If there were still doubts that IU was going to make it big even after her first number 1, they were eventually silenced six months after Nagging’s release as she dropped her third EP Real with the iconic single  Good Day. Yes, it’s that song that people attempt to sing on everything from variety shows to audition survival programs because of that oxygen-depleting IU rendition of the line “I’m in my dream” with three key changes.

This song cemented IU’s place in K-pop as she amassed new fans with the song. Moreover, she also recorded a Japanese version of the song, which reached a top 5 position in the country’s Oricon Charts. In her home country, she managed to outsell her first #1 song, as Good Day sold a total of close to 4.5 million copies.

The music video for this song is arguably one of IU’s most known. It starts off with IU visiting a general shop with her pet, a giant parrot. We discover that she actually has a huge crush on the shopkeeper and is thinking of ways to get his attention. But then, her giant parrot began saying, “saranghaeyo oppa.”

And that’s just the first 30 seconds of the video.

So we see IU through the rest of the video overanalyzing things, with singer-pianist Jung Jaehyung making random appearances in her house. The dance sequences are cute, of course, and if you notice, her dancers on this video are the dancers she features on her music videos and concerts up to now. Talk about loyalty!

Anyway, the video ends with the shopkeeper going to IU’s house, with IU expecting him to confess as well. Alas, he only returns the parrot who outed her. But no, IU goes after her oppa and hugged him from behind, but shopkeeper oppa turned around and only patted her head.

If that’s not a rejection move, then nothing is.

So, IU sings the last lines of her song while looking out on her window and catching falling snow. On the other hand, shopkeeper oppa takes one final look back at IU’s direction before walking back to his store. Will shopkeeper oppa notice her in the future? Only time will tell.

On the music video for the Japanese version, the general store is replaced by a violin workshop, with shopkeeper oppa replaced by a violinmaker. Japanese violinmaker oppa doesn’t really mind IU Japanese version’s obvious flirtations as he goes about his day polishing wood and doing the usual things violinmakers do. He also has a pet parrot, while IU has a smaller green parrot who doesn’t pre-empt her confession. Instead, the green parrot gave her a set of keys that may open the violinmaker’s bedroom. Creepy, right? Well, considering shopkeeper oppa just barged in IU Korean version’s room to return her talkative parrot, getting access to the room of someone you like may not be a huge issue in IU’s music videos.

Anyway, IU Japanese version sneaks into the room that looks more like a greenhouse but contains violinmaker oppa’s personal effects, including what looks like a diary or notebook, which IU reads with creepy gusto. Alas, violinmaker oppa catches her, takes away the notebook from her, and… pats her head. As in the same thing shopkeeper oppa did upon receiving IU Korean version’s back hug.

I guess both Japanese and Korean oppas didn’t see the nation’s little sister as a woman yet, even with three key changes and a line that was sung for 10 seconds in one breath.

Taken from Real+, which was the reissue of IU’s 2010 Real EP.  This 2011 song became the third song of IU to take the top spot in the Gaon charts. The single reached more than 2.9 million sales, while Real+, the EP, where the song came from, reached close to 24,000 copies in sales. The Japanese version of this song is so far, IU’s only #1 in the Billboard Japanese charts.

The music video that accompanied the song’s release features IU wearing a black dress and singing the song while splayed on the floor, crying.

The title track from IU’s second full-length album Last Fantasy, “You and I” was quite historic as it reached No.1 not only on Korea’s Gaon, but was also her first song that charted in the US Billboard World Digital Songs charts, where it peaked at number 3. You and I is also a very important song in IU’s career because up to now, it still is her highest-selling single in Korea with over 6 million units sold.

As for the music video of the song, two versions were released – the main version and a performance video, both getting more than 30 million views. The main music video has a quirky storyline with matching locations, including what seems to be a clock tower and a train. It’s in the clock tower where IU seems to live, where ironically, she also looks like a watchmaker while taking care of a boy who looks like he’s in a coma. Well, she has tried everything from drawing something on his wrist to tickling him with a feather she got from her pet goose (Oh, IU and her penchant for weird pets – remember her talkative bird who outed her with her oppa in Good Day?)

In the middle of the video, IU finishes making what looks like a cog which she uses inside a booth that looks like a TARDIS in Doctor Who. The moment she gets the machine in the booth to work, it looked like she time travels until Mr. Comatose wakes up. However, Mr. Comatose wakes up, approaches the time machine booth, sees IU, and cries. Beats me what that was about.

Cut to the last scene where apparently, IU is this saleslady in a jewelry or gift shop where she sells something to Mr. Comatose who doesn’t recognize her until he was halfway out the door. It seemed like he remembered something, looked at IU, and flashed a smile, while our girl gave an “I thought you’d never remember me” look back. End of video.

This song from Spring of a Twenty Year Old, IU’s 3rd single album (and her 2nd Korean one) sold 3.2 million copies getting to No.1 on Gaon in May 2012. The song also topped the Billboard Korea K-Pop Hot 100 a week after it was released internationally. The music video for the song is actually a featurette that included a short interview and behind-the-scenes footage of the video shoot, where IU is in some foreign country buying fruit, getting drenched in the rain, playing her guitar beside a canal, and riding a ferry while remembering some guy.

Where are the SIXTEEN Contestants Now?