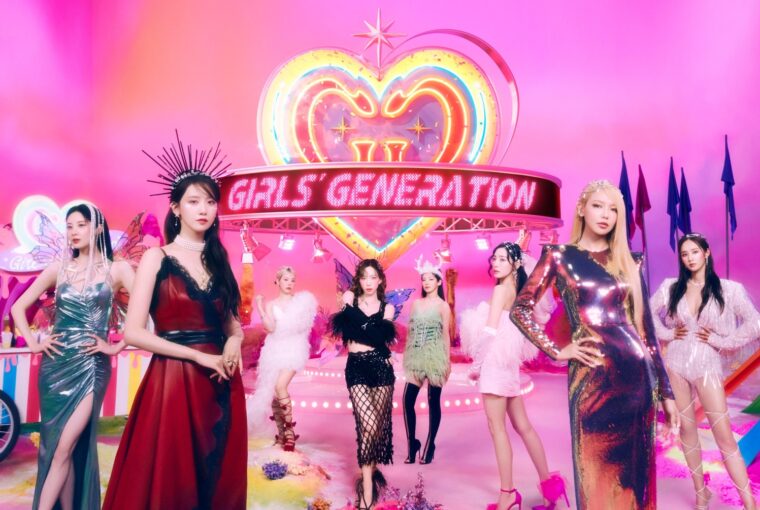 If Taylor Swift’s music video for her hit Anti-Hero earned the reputation for being the video with the most easter eggs, Girls’ Generation‘s video for their comeback single, Forever 1, couldn’t be far behind. The number of tributes and hidden meanings behind the images in the video can rival the number of Hidden Mickeys the Disney Channel used to show in a day! The good news is, it doesn’t even take a true-blue (make that true-pink) SONE to notice a good number of them — yep, that’s how SNSD has ingrained itself in K-pop culture that even casual fans can recognize the references.

Here is a list of all the easter eggs that may be found in GG’s Forever 1 music video. But here’s a disclaimer: As much as we tried to catch all the references, there will always be misses that more eagle-eyed SONEs have and will point out. Don’t say we didn’t try, though!

We’re not even into the video yet, and SONAR-eared SONEs already pointed out that the melody at the start of Forever 1 is definitely the opening keys for Into the New World. Speaking of the girls’ debut song, we have to mention that the track is produced by longtime SM composer and producer Kenzie. Yes, exactly the same Kenzie who also worked on their debut song fifteen years ago. So, it does make sense that this musical easter egg is not just some forced connection, as the girls themselves verified it in the last episode of their latest reality show, Soshi Tamtam (2022).

And we’re not even 10 seconds into the video (the song, even) when we spot one of those tell-tale “You know you’re watching an SNSD song when…” signs. It is none other than the signature Tiffany English line.

And so, for Forever 1, after eternal center Yoona identifies our emotions as “It’s love, it’s love,” our American girlfriend declares, “We’re not stopping.”

When Fany says we’re not stopping, there’s no question we are not. On to SNSD‘s silver, golden jubilee! We’re not stopping because duh, SNSD is FOREVER! It’s in the title, come on!

The nods to scenery, outfits, and sets!

If you’re looking for references and nods to previous SNSD music videos (all of which are quite iconic in the own right), Forever 1 is rich and teeming with them! Here’s some we saw:

Pink and bright sky blue is definitely a nod to the Party music video. Not that there is that exact color combination in the Party music video, but most of the beach and pool (swimming, not the game) scenes have the blue water and sky background, coupled with the giant inflatable pink flamingo and lifesavers Yuri and the girls play with. Tiffany’s plane scenes also give a beginning of the Party music video vibe, although that can already be considered a bit of a stretch, as the center of that plane scene in Party was Sooyoung.

The group dancing scenes outside the cinema are definitely a throwback to the Paparazzi music video. Not to mention the red-carpet walking and brushing off the paparazzi shots, although the girls, particularly Sunny are noticeably friendlier towards the red-carpet staples in the Forever 1 version. Plus, they are not wearing trench coats and shiny black and red outfits, as the wardrobe theme for these scenes calls to mind the sparkly-er, jewel-tone outfits of the iconic Gee and the criminally underrated Holiday/All Night era.

The slo-mo scenes of the girls in the bridge are a throwback to the intro of the music video to The Boys, with golden confetti replacing the shower of rose petals. Only trophy lifting for this one instead of dove releasing because a) there’s no more dove and b) dove releaser left the group in 2014.

A gritty dark alley with torn posters that serve as the background to Yuri’s modeling segment gives out that distinct Catch Me If You Can vibes. Can be considered a stretch, but then don’t we live for these itty-bitty nuances?

The countless appearances of the number 15 (e.g., Stage 15, 15 in the layered stage resembling a cake where the girls are filmed in the singing segments), conjuring the group’s 15th anniversary, as if we need a lot of reminding.

Started from looking for the new world, now we here

The music video is no doubt a sort of continuation of their music video for Into the New World. While their debut music video showed them working on hobbies or interests (e.g., fixing and painting a bike pink for Fany, breaking in a new pair of sneakers by dancing in a deserted stairway for Hyo, flying a plane for Taeyeon, etc. etc.), Forever 1 shows our girls as fully realized women who are continuing to pursue their own thing and living their own lives while still being there for each other and the fans because, duh, we are forever! We then have references for the current gigs of each member:

Our kid leader is seen in her solo scenes on a stage surrounded by musicians with cabaret feels, which is also much like Sooyoung’s individual scenes in All Night (remember where she sings in what looks like a lounge and Yuri stops and gets starstruck at the sight of her?). Obviously, this is a reference to Taeyeon’s immensely successful career as a solo artist. From I to INVU, Taeyeon has repeatedly proven that she is not only one of K-pop’s best girl group vocalists but one of Korea’s best vocalists, full stop.

Our happy vitamin in a stretch limo

Among all eight GG members, Sunny has been the most inactive in terms of a music career. Quite unfortunate really, considering that she is one of the group’s four main vocalists (SNSD main vocals = TaTiSeo + Sunny). As far as we can remember, her last singer activity outside GG (and Oh!GG) was a duet with former SM labelmate Henry. The Forever 1 music video recognizes this, as it showcases our mood setter’s thriving career on TV with her multiple variety show gigs.

On the other hand, we have our sparkling Tiffany, who has kept herself busy from the get-go when she left SM Entertainment in pursuit of a more international career. After releasing a full-length album featuring tracks all in English, she returned to Korea as a judge/mentor in Girls’ Planet 99 and as Roxie Hart in the Korean adaptation of the musical Chicago. In the music video, Tiffany is seen on a plane, with multiple staff members handing over the documents of her upcoming projects, which shows that these days, Fany is taking full control of her solo career.

How multi-faceted can our main dancer be?

Ever the most multi-faceted member of SNSD, Hyoyeon has been a champion speed skater, a reality competition contestant, a fur mom, and obviously, a dancer. But when you look at the girls’ career trajectory, next to Taeyeon, our dancing queen has been the most active in the music industry as a member of both Oh!GG and Got the Beat, but also as a DJ. In the forever video, we can see DJ Hyo living her best life behind the DJ booth, and we can’t wait for more banging releases after Dessert, Minute, and Deep.

SNSD‘s black pearl Yuri has kept a balance between her singing career and other ventures. While she has also released other music as a solo artist with the release of her solo EP The First Scene in 2018, she is also a part of Oh!GG. Apart from this, she has amped up her CF modeling career and revitalized her promising career in TV dramas. After all, she was a part of very popular dramas like Fashion King (with Yoo Ahin and Lee Jehoon) and Local Hero (with Park Shihoo) but she somehow took a break from acting in 2018 (maybe to focus all her energies on promoting her solo release) until her recent turn in the historical drama Bossam.  In the music video, Yuri is getting photographed at what appears to be a modeling gig.

Our iconic lady in a red dress

Even during the peak of GG supremacy, Sooyoung had already started a career in acting with appearances in The Third Hospital and Dating Agency: Cyrano. After her departure from SM after the All Night/Holiday comeback, she went full throttle with her acting career with plum parts in high-profile dramas such as Run On (with fellow idol-turned-actor Im Siwan) and If You Wish Upon Me (which actually went up against Yuri’s Good Job in its timeslot. And who can forget her much-publicized appearance as the lady in red in the red dress in the 2020 MAMAs? The Forever 1 music video has SNSD’s sassiest member signing autographs and taking pictures with fans, a nod to her successful life as an actress.

Our eternal center Yoona has inarguably built the most successful career outside of music among the Girl’s Generation members. With high-profile appearances in high-rating dramas and movies such as The K2 (with Chang Jiwook) and this year’s Big Mouth (with Lee Jongsuk). Yoona is reflected in the music video as an actress, with one scene seeing her about to be devoured by a monster with tentacles on the background screen, which may remind people of her first lead movie role in the wildly successful disaster flick Exit where she was seen jumping off buildings to avoid a deadly gas attack with Jo Jungsuk.

Our maknae has already built a solid reputation as a stage musical actress with her appearances in Moon Embracing the Sun and Mamma Mia! even during her active years in SNSD pre-2018 hiatus. When she left SM Entertainment, she pursued an acting career with other agencies and has so far appeared in major projects such as Time and Love and Leashes.  In the Forever 1 music video, she is seen on a theatre stage with an elegant backdrop, which definitely calls to mind her Scarlett O’Hara stage role.