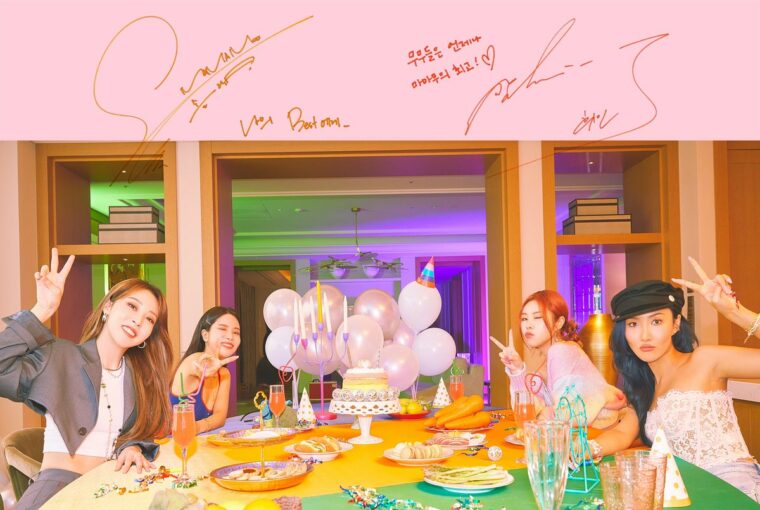 I SAY MAMAMOO: THE BEST album, out now. Photo: RBW_MAMAMOO/Twitter

The year 2021 was supposed to be scary for MooMoos. It’s MAMAMOO’s seventh year in the industry, and, coincidentally the dreaded time when the quartet must decide about contract renewal. We all know what that means: the 7-year curse.

No one could have predicted what’s to come for the group. No matter what decision, though, MAMAMOO’s success is undeniable. Despite being from a relatively smaller company than the likes of the Big 4, MAMAMOO steadily rose to fame throughout the years and carved their own unique space in K-pop.

Mamamoo is known for serving some of the best vocals in the industry. You can hear the harmonies as early as in their group intro. The group also got more popular after their win in the idol survival show, Queendom. They also broke barriers in KPOP by bravely taking on sexier and more mature concepts. Not to mention their push for body positivity, women empowerment, and feminism among their fans.

Meanwhile, their solo careers are never a miss. Every member carries hits, OST singles, and mini-albums under their arms—Hwasa’s TWIT and Maria, Solar with Spit It Out, Moonbyul’s Selfish and Eclipse, and most recently, Wheein with‘water color. Everything’s going well for the ladies, right? But then again, success and constant activity can’t really determine the group’s fate. (Missing GFriend and IZ*ONE!)

News about each member’s contracts didn’t come in one go: Solar and Moonbyul acted fast and renewed with RBW Entertainment back in January 2021. Then, Hwasa followed them last March. As for Wheein, though, she decided to leave the company last June. Wheein then signed with VIXX Ravi’s label, THE L1VE.

Luckily, this didn’t trasnlate to bad news for Moomoos. Wheein’s exit wasn’t the end for MAMAMOO’s OT4. Despite leaving the company, Wheein agreed to stay in the group and to promote with the girls ‘til 2023.

Back in June, they gave fans a full-group comeback with the mini-album WAW. And the group didn’t stop there! On September 15, they celebrated their seven years together with the release of their I SAY MAMAMOO: THE BEST album.

Named after their group intro, MAMAMOO’s 23-track compilation album is made of new songs, genre-shifting renditions of fan favorites, and 2021 versions of their hits. With the combination of reimagined tracks and fresh, new ones, it feels like every song brought something new, each standing out in their own ways. Both old and new Moomoos would also be able to listen through the evolution of the group’s music through this album.

The album starts with the new mumumuch, a chill track that’s full of funky beats, smooth runs, and fun parts that feels like their onstage adlibs. This is followed by the mellow and sentimental Happier Than Ever, another new song with lyrics that looks back at the good days of a newly ended relationship.

MAMAMOO did genre exploration for their songs, which felt reminiscent of their Queendom performances. Paint Me and Starry Night were accompanied by an orchestra, gogobebe felt like a rock concert, HIP went with a hipper remix, and AYA had traditional instruments in the background.

And those are just a few of the tracks! Unsurprisingly, every version showcased the group’s amazing vocals in different ways.

It’s amazing for a group this young to release a jampacked compilation album. Usually, Western artists would wait decades to compile golden tracks to put on their “Best of” albums. But then again, if we look at Mamamoo’s discography, they already gave us 3 studio albums and 11 mini-albums, which can be considered as enough material for a “Best of” compilation.

With every album run-through, it felt like hearing details that you didn’t notice last time. The compilation also veered away from merely being a group of old songs strewn together. MAMAMOO rearranged and rerecorded everything to create a diverse addition to their discography, giving Moomoos a familiar yet refreshing plunge.