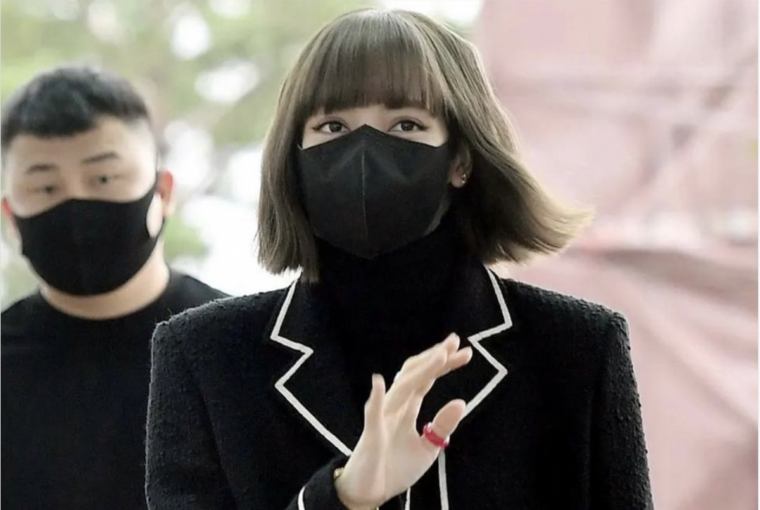 Finally, after days of anticipation, with everybody asking, will she or won’t she, Lisa finally took that flight to Paris and joined (well, sort of) her three BLACKPINK sisters Jisoo, Rosé, and Jennie to revel in Paris Fashion Week celebrations.

As we have reported earlier on Blackpink in Paris Fashion Week 2021, Jisoo and Rosé were first to book their appearances in the shows of the fashion houses they endorse. Jisoo was first to make a splash as she attended the Christian Dior Spring-Summer 2022 Paris Show at 2:30, local time, last Tuesday, September 28. BLACKPINK’s visual wowed everybody as she posed for photos wearing a white mini dress with black embroidered Greek statues and motifs, which according to Vogue, is from the Dior Resort 2022 collection. Talk about effortless chic!

But before the fashion show, Jisoo also explored the House archives of Dior. At Dior Heritage, Jisoo had her picture taken holding the original Lady Dior bag that was carried by Princess Diana. Dior’s social media accounts also posted a photo of Jisoo at the Eiffel Tower, all decked in Dior. “I love you Paris,” the K-pop idol is heard saying in Korean in the video.

Not to be outdone, Miss Rosé who arrived in Paris with Jisoo, also made sure her presence was felt when she stole the show at Saint Laurent Spring-Summer 2022 at 8:00 in the evening on the same day as the Dior event. Wearing a sheer black chiffon minidress with silk trim over a pair of black hot pants, BLACKPINK’s main vocal was again the toast of the fashion scene after making a much-publicized and historic appearance in the Met Gala, where she, along with CL, was the first female K-pop idol to grace the event.

After attending the Saint Laurent show, Rosé did a couple of shoots for YSL Beauty before going back to Seoul and thus, missing the arrival of the next member to arrive in Paris.

Since Solo artist Jennie is known as a brand ambassador for major fashion brand Chanel, fans thought it was inevitable for her to join the two in Paris. And that she did! In the afternoon of the 29th, Jennie arrived in Paris, dressed in Chanel from head to toe. Upon her arrival, she took to Instagram to present her proof of life, as she met her bandmate Jisoo and the two went out for dinner together the same evening. Both idols had cardigans on to warm themselves warm as the autumn weather in the city of lights was in full blast.

As of press time, Jennie has finished attending the Chanel Spring-Summer 2022 Paris that happened at 10:30 AM, local time. She was a vision in red, wearing a red bouclé crop top and mini skirt with pearls, making her look prim but with an edge.

Finally, we have Lisa, With her arrival in France on October 4, Lisa began trending on Twitter as fans started talking about her leaving South Korea and joining the three other members in order to attend Paris Fashion Week. However, having all BLACKPINK members in Paris at the same time was not meant to happen because as mentioned earlier, Rose was already in Seoul on the 29th, while Jisoo left Paris on the 4th, the same day Lisa arrived.

As to why Lisa is in Paris, there is still quite a lot of mystery pertaining to that. Celine, the French fashion brand where she is the global ambassador, does not have any shows for this season,   This led to people speculating that Lisa may have accepted an invite from another fashion house, Miu Miu, which will have an event today (October 5) and has been worn by the idol on her recent appearances. Also, reports have surfaced that BVLGARI, the jewelry brand Lisa is also an ambassador of, is staging events, including a showcase at the Paris Opera today, October 5.

But then, YG Entertainment stepped in.

“Our great ambassador @lalalalisa_m is in Europe. Unfortunately, due to COVID, her agency prefers [that she] not [participate in] events or shows. That’s also the reason why insofar we could not shoot her together with @zendaya, @lilyaldridge and @vittoria for the @bulgari Brand Campaign 2021/22 and [why] we could not run a major event yet together.”

So, the mystery remains: What is Lisa doing in Paris? If YGE has barred her from joining events (which is so weird considering the three have already joined numerous events), why did they fly her there? Let’s hope we get further clarification the soonest.

ENHYPEN Members Recover From COVID-19 In Time For October Comeback